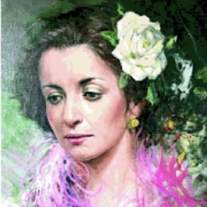 After a lengthy illness, our beloved Ymelda passed on peacefully at her home in Santa Fe, New Mexico on August 27, 2016.  She was born to her father Horace De Vargas and mother Celene in July of 1939 in Española, NM.  Spending most of her youth in San Pedro, she went to schools in the Espanola Valley as well as Loretto Academy in Santa Fe.  It did not take long to realize that Ymelda was a very unique and exceptional person.  Being brought up in a household with a father that was a New Mexico Senator (President Pro Tempore 1947/1972) and mother who was a highly respected educator and Principal, Ymelda naturally began vast series of achievements.  But first, she married Dennis Salazar and gave birth to Ken their son and later her daughter Teri was born to her and Richard Moya.  Shortly thereafter, she completed her education and began a stellar and storied career starting at entry level and finishing at some of the highest levels of government.  A highly trusted and loyal administrator for Governor Bruce King in all three of his administrations (1971 to 1975, 1979 to 1983 and 1991 to 1995) she was respected for her talent of knowing how to “get things done”.  In the interim she was recruited to go to Washington DC and work constituent services for US Senator Joseph Montoya.  In addition, Ymelda was a member of the New Mexico Parole Board, had leadership positions with several State Departments, election campaigns, legislative lobbying and most recently with the New Mexico Film Commission where she was instrumental in encouraging tax incentives for film productions.  She was a Trailblazer and Pioneer in every sense of the words.
Ymelda was preceded in death by Grandparents, Aunts and Uncles, her father Horace, mother Celene and Brother Donald.  Also preceding was Yogi Bhajan with whom she had a spiritual relationship and arranged for him to pursue the founding of the 3HO Foundation and subsequently being named Woman of the Year.  She is survived by her son Ken and daughter Teri, Grandsons Dominic, Lucas, Diego and Granddaughter Tess.  Close cousins she grew up with Leo and Ron Vigil, Lorraine Martinez, Marie Pacheco, Elena, Paula, and Ymelda Mae Martinez and are all honorary pallbearers.  Addition pallbearers are Ivan Guillen, Clyde Vigil, Gene Montoya, Raymond Ortega and Christine Maestas.  The Family extends special Thank You to caregivers Debra Flores, Raymond Ortega, Doretta Rodriguez and to the Ambercare Hospice team.
A memorial mass will be held at St. Francis Basilica on 10:00 am on Wednesday, September 7, 2016 with graveside services at Rosario Cemetery immediately following the mass.  A reception will be held at the Elks Lodge, 1615 Old Pecos Trail, in Santa Fe following these services.
It is optional to send your donations to the New Mexico Alzheimer’s Association in lieu of flowers.

To order memorial trees or send flowers to the family in memory of Ymelda De Vargas, please visit our flower store.