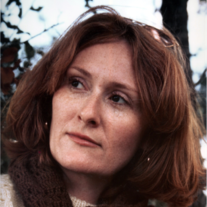 Sandra Rudy, whose home has been Santa Fe, New Mexico, for many years, died on May 29, 2017, after suffering from ALS for two years.  Before her illness, Sandra’s life was one of constantly helping others and contributing time and effort to her community. She left behind Steven Rudy, her husband of 43 years to whom she was attached at both the hip and the heart.  Additionally, she is survived by her brother Gary Roberson (wife Dana), her niece, Reni Roberson Fitzgibbon (husband Scott), their children, Alaisdair and Jaimeson, and her nephew, Jon Roberson, all of Albuquerque, New Mexico.
Sandra was born in Amarillo, Texas, in 1941, and grew up in Hereford.  After earning a Bachelors and Masters of Arts degree (1968) at Baylor University, she taught English in Lubbock, before moving to Houston to continue teaching there and in Clear Lake, Texas.  In 1976 Sandra left teaching to join Steven in his company, Creative Restoration.
In 1979 Sandra and Steven left Houston to start a new chapter in life in Santa Fe.  They were together 24/7, working and living, a pattern they never regretted.
Their new life included the S. Rudy Gallery (1980-1983), a contemporary art gallery.  This was followed by S. Rudy Design (1984-1990) of Santa Fe, and Crested Butte, Colorado.  S. Rudy Design specialized in unique knitted garments and accessories.  In 1990 Sandra and Steven began doing fine art and documentary photography providing them an excuse to travel and photograph the world from the Orkney Islands, Scotland, and England to Jordan’s Petra, and Southeast Asia’s VietNam.  All these places became close to Sandra’s heart. With Steven, their images became the subjects of many exhibits. Their photography also became part of museum collections as well as notable private collections.
In addition to her work commitments, Sandra always made time to help out friends whenever the need arose as well as volunteer for her community.  In Houston, in addition to teaching, she was the Assistant Training Director for Amigos de las Americas (1969-1974). This required spending part of 3 summers working in field programs at villages in Guatemala and Honduras.  In 1976-1979 she was also a member of the Women’s League of the Houston Symphony.
In Santa Fe during the 1980s, Sandra was a member of the board of the Santa Fe Festival of the Arts, co-chair of its first Wearable Art Show, and later she was a member of the steering committee for the Second Wearable Art Show.
From 1988 until 2002 Sandra and Steven moved further and higher (9,000 feet) in the Rockies to Crested Butte, Colorado.  Here she was a member of the board of the Crested Butte Society which staged an annual visual arts festival and repaired and maintained the town’s historic railroad station. She was on the board and was president of the Crested Butte Center for the Arts. Lastly, Sandra was a member of the committee working to move K-8 grades back to Crested Butte from Gunnison, Colorado, and was a member of the committee that renovated an historic rock schoolhouse and converted it to serve as the town library.
In 2002-2012, back in Northern New Mexico, she was a member of the Advisory Board of Vecinos del Rio in the Rio Grande Valley.  She volunteered with Vecinos’ Mesa Prieta Rock Art Project and was on Vecinos’ Environmental Committee (the group that fought irresponsible mining in the Upper Rio Grande Valley).  For two years she co-chaired the Arts for the Children program at Velarde Elementary School.  In performing arts, Sandra was a member of the board of Santa Fe’s Pro Musica.
Throughout life, in spite of her many other commitments, Sandra always had time for others.  Her freezer was always stocked with her “secret recipe” chicken noodle soup for the friend or even casual acquaintance who had come down with the flu, a cold, a sprained ankle, or something more serious.  Whatever the problem, her chicken noodle soup was the answer.  Sandra was always the one that started up a conversation with a total stranger in the Española cinema before the feature started.  She stopped and gave directions to the French tourist looking lost and forlorn in downtown Edinburgh.

To many throughout the world, Sandra was the world’s best friend.  When the winds of life failed to fill her sails, Sandra simply picked up an oar and started to row.

To order memorial trees or send flowers to the family in memory of Sandra Rudy, please visit our flower store.