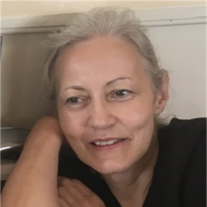 After many full years as a writer, editor, storyteller, cat lover and beloved sister and friend, Rita Celeste Munzenrider passed away unexpectedly in Santa Fe, New Mexico, on May 14, 2017. She was 57 years old.
The youngest of eight children, Rita was born in Helena on Feb. 25, 1960, to Robert and Mary Evangeline Munzenrider. The family recognized early on her creativity and zest for life.
Rita graduated from Helena High School in 1978 and enrolled in the School of Journalism at the University of Montana. Following graduation, she worked as a reporter for the Helena Independent Record before moving to the Billings Gazette, where she was a respected, award-winning cops and courts reporter from 1982 to 1992. In 1994, she joined the staff of University Relations at UM, and her competence and dynamic energy quickly moved her up the ranks. She relished the chance to promote UM and her beloved Grizzlies. In 2001 she landed her “dream job” as permanent director of the department.
During her tenure, Rita led a creative team that garnered many regional and national awards for publications and creative marketing. She and her department earned a total of 11 different awards and recognition from the regional Council for Advancement and Support of Education (CASE). Perhaps the pinnacle was the 2001 Virginia Smith Grand Crystal Award, which is the top marketing award presented by CASE. The award was for implementing “The Discovery Continues” Lewis and Clark marketing theme at UM. Rita also received the Rising Star award from CASE and was later was later appointed to the CASE board of directors and received recognition for her tenure in 2008. She also won the national 2004 Beacon Award from the Association of Educational Publishers (AEP) for an edition of UM’s presidents report. In 2007 she won a second Beacon Award for the UM annual report, “Legacy of Giving”.  She received various awards from National Newspapers Admissions Marketing and Advertising Association for a five-year period for reports and public relations including an Admissions Marketing report.
In the director’s role of University Relations, Rita often served as the University spokesperson and helped campus departments promote their work to local, state and national news outlets. She also assisted with UM fundraising campaigns and served on a variety of UM boards, including the President’s Cabinet. She won several professional awards from UM for her excellent work, including the 2001 J.B. Speer Award for Distinguished Service. Rita promoted UM partnerships with the Missoula community, serving as the UM representative for the annual Heart Walk fundraiser and the Missoula AIDs Council. She participated as a board member for A Carousel for Missoula, and helped launch UM’s Easter Eggstravaganza egg hunt.
Rita lost her brother Steven to AIDS, and she became an activist for AIDS awareness and education. She helped bring the Names Project AIDS Quilt to UM that included her brother’s panel. She was appointed by Gov. Marc Racicot to a four-year term on the Governor’s HIV/AIDS Advisory Council, earning a governor’s award for her efforts.
Rita was diagnosed with breast cancer in 2008 and underwent chemotherapy and radiation treatment. This March marked her eighth year cancer free. Unfortunately, she experienced severe neuropathy in her legs as a result of her original treatment and was unable to return to work full-time. She worked part-time at University Relations until 2011.
Rita moved to Santa Fe in 2014 to be closer to her sister Claire and enjoy a warmer climate. She was happy in her new environment, enjoying her house, garden, three cats, movies and lunches with her sister and friends. She had lost her feline friend, Franz, in early May. He was her “bodyguard,” remaining by her side throughout her cancer treatment. They had a special bond.
Rita will be remembered for her warm and welcoming smile and her passion for life, love and her profession. She delighted in celebrating her family, friends and co-workers. During her professional career Rita would make sure that anyone having a birthday would have a cake. She had a great sense of humor and enjoyed playing pranks on her co-workers. Rita was a gifted writer whose work focused on the human experience. She set high standards for herself and others in her profession and was a significant mentor to those she worked with. Whenever she encountered someone who was struggling she would jump in to help. Rita lives on in the many people whose lives she touched.
Rita was preceded in death by her parents, Bob and Eva Munzenrider; her brother Steve Munzenrider; sister Mary (Munzenrider) and husband Fredy Martinez; and sister-in-law Connie (Callahan) Munzenrider. She is survived by siblings Joe Munzenrider (Helena); Bob Munzenrider and wife, Mary (Scottsdale, Arizona); Rosie (Munzenrider) and husband, Vince Buzzas (Missoula); Claire Munzenrider (Santa Fe, New Mexico); and Jim Munzenrider and his wife, Debi (San Mateo, California).
Rita was a fun and special aunt to Joe Martinez (Sammamish, Washington), Christopher Munzenrider (Las Vegas), Lisa Atkins (Louisville, Kentucky), Mike Munzenrider (Minneapolis, Minnesota), Paul Munzenrider (Virginia Beach, Virginia), Aran Buzzas (Missoula) Jocelyn Arthun (Portland, Maine), Tasa  Day (Scottsdale, Arizona) and Chloe Munzenrider (San Mateo, California).
A memorial will take place with family and close friends in Helena on July 1-2.
A celebration of Rita’s life also will be held from 12:30 to 2 p.m. Wednesday, July 12, at the University of Montana in the Brantly Hall Presidents Room. Anyone who knew Rita is invited to attend. Those wishing to express condolences may do so at http://www.avistacremationandburial.com/obituaries/Rita-Munzenrider/  For those who wish to make a donation in Rita’s name, they can be made to the UM School of Journalism, your local Humane Society or Team-Up Montana, a local cancer patient support service.

To order memorial trees or send flowers to the family in memory of Rita Munzenrider, please visit our flower store.