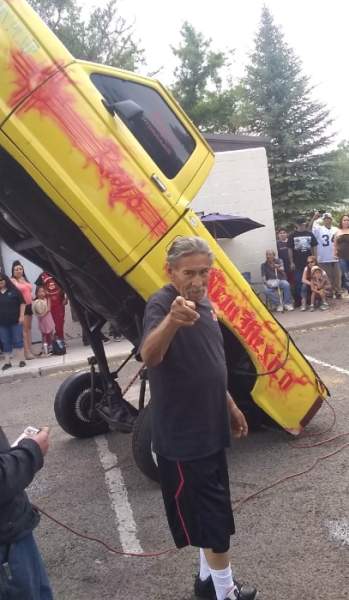 Reymond Martinez AKA Ray C. Martinez, the legend born January 23, 1946.  A native of Chimayo was called by our Lord on Saturday, September 7, 2019, where he died peacefully and was surrounded by his loving family. Rey’s life was a wonderful life he had a passion for cars you name it he had every type of car as he grew up and throughout his years. Low riders was mostly his interest until he wanted something more exciting and decided to build his own  racing car well known as the farmers toy.  Another hobby of his was building a hopper to compete in the low rider car shows where he hit the world’s record.  He was also a well-known mechanic. His career started off in California where he moved for a few years to work in Aviation on planes moved Back to Chimayo in the 60’s where he worked at the Santa Fe Downs in the evening mechanic in the day.  Rey is the son of the late Salomon Martinez and Stella Gonzales married for 52 years to the late Viola Martinez.  He is survived by his loving children Eppie Martinez (Lisa), Bernadette Jaramillo (Elijah), John John (Nichole), raised as daughters Eperanza Martinez (Leo) and Kendall Jaramillo; nephews Eppie Jr Martinez (Mykala), Dylon Martinez, Kendall Jaramillo, Ashley Cook (Kyle), Luke Martinez and McKenna Martinez; great grandchildren Ricardo and Diego Martinez, Kyla Cook, Naveah Viola Jaramillo; god-daughter Judy Trujillo (Danny Ortiz); mother in law Aurora Salazar; brothers and sisters in law Darlene Johnson (Rick), Yvonne Telles (Danny), Julian Lopez (Dawnette), Tommy Lopez, Andrew Salazar and Roy Garcia (Lucinda); brothers and sisters Henry Gonzales, Pauline Gonzales, Albert Gonzales, Paul Gonzales (Arlene) and Rosalita Esquibel; raised like a brother Gilbert Coriz and loving aunt Tia Meres.  A public visitation will be hold on Thursday, September 12, 2019 at 6:00 p.m. at El Buen Pastor Church in Espanola with a devotional service to begin at 7:00 p.m.  A funeral service will be held on Friday, September 13, 2019 at 11:00 a.m. also El Buen Pastor Church in Espanola with burial to follow at Temple Bautista Cemetery in Chimayo with the following serving the family as pallbearers Ernie Lopez, Dylan Martinez, Eppie Jr. Martinez, Clint Montoya, Larry Martinez, Michael Coriz, Elias Coriz and Henry Gonzales.

The family of Reymond  "Ray" C. Martinez has entrusted the care of their beloved one to Avista cremation & Burial.

To order memorial trees or send flowers to the family in memory of Reymond Martinez, please visit our flower store.