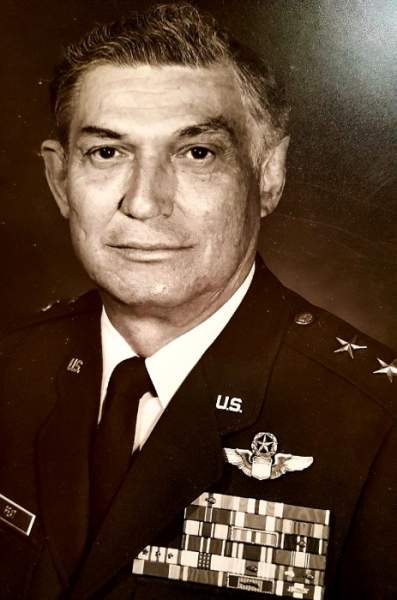 Upon graduation from Northwestern University, he was commissioned as a second lieutenant in the Air Force.  He entered active duty in March 1957 and received his pilot wings at Goodfellow Air Force Base, Texas in July 1958.  His first operational assignment was to Westover Air Force Base, MA, flying KC-97 tankers for Strategic Air Command.  In October 1962 he transferred to Clinton Sherman Air Force Base, OK, flying KC-135s with the 902nd Air Refueling Squadron.  While assigned to the 902nd, he flew a number of missions in support of Boeing Aircraft Co. test program to provide conventional bomb carriage on B-52s.  He also participated in several deployments to Southeast Asia, where he flew 21 combat sorties from a series of island and mainland bases.  After completing eight years of duty with SAC, he was assigned as an assistant air attache at the American Embassy, Djakarta, Indonesia, until late 1967.

The general then transferred to the EC-135 equipped 6486th Airborne Command Control Squadron, “Blue Eagle,” Hickam Air Force Base, Hawaii, where he served in various crew and operational positions.  In February 1971 he was assigned to Tan Son Nhut Air Base, Republic of Vietnam, as chief of the Programs Development Division, Directorate of Plans, Headquarters 7th Air Force.

Upon his return to the United States, General Peat was assigned to Headquarters U.S. Air Force, Washington, D.C., in the Directorate of Plans, as a staff officer in the Strategic Division.  He performed additional duties as a speech writer for the secretary of the Air Force, the vice chief of staff, and the deputy chief of staff for plans and operations.

In August 1975 he entered the Air War College, and upon graduation in July 1976, he was assigned to Supreme Headquarters Allied Powers Europe, Mons, Belgium, where he served briefly as a staff officer before becoming executive officer to the assistant deputy chief of staff for plans and policy.  During the last year of this assignment, General Peat served as chief of the Reinforcement Planning Group and special assistant to the Supreme Allied Commander for reinforcement matters.

General Peat returned to Washington, D.C., in July 1979 and served with the Air Staff in the Directorate of Plans.  He then served as assistant deputy director for force development and strategic plans, Plans and Policy Directorate, Organization of the Joint Chiefs of Staff, from July 1981 until May 1982, when he became deputy director.  In September 1984 the general returned to Supreme Headquarters Allied Powers Europe.

In 1987 he was assigned to Offutt Air Force Base, Omaha, Nebraska, where he served as chief of staff, Headquarters Strategic Air Command.  General Peat retired from USAF October 1, 1989.

General and Mrs. Peat retired to Santa Fe, NM in May 2002.  General Peat enjoyed hiking, painting, reading and travel.  Through the years General & Mrs. Peat spent time in many countries of Europe and Asia.  Australia was another destination – 3 months in a “truck” and he did all of the driving on the “wrong” side of the road!  He also enjoyed Peru and the Galapagos Islands, China and Japan.  During his time in Santa Fe he was always an avid supporter of the Santa Fe Farmers’ Market and served on their board for several years.

Cremation has taken place.  Internment will be at a later date at Arlington National Cemetery, Washington, D.C.

A celebration of life will be held at the home at a later date, to be announced.

In lieu of flowers, donations to the Wheelwright Museum, 704 Camino Lejo, Santa Fe, NM  87505; to the Santa Fe Farmers’ Market or to the charity of your choice would be welcomed.

To order memorial trees or send flowers to the family in memory of Randall Peat, please visit our flower store.