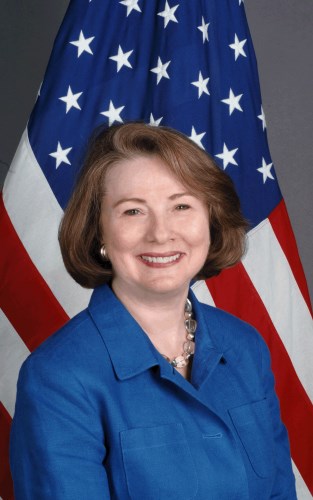 Patricia McMahon (Pat) Hawkins died suddenly on October 6, 2021. She had recently turned 72 and was enjoying a comfortable retirement after more than 30 years of service to American diplomacy, during which she served widely in French-speaking Africa and in Latin America. Her service culminated with three years as Ambassador to the Republic of Togo, a small country between Ghana and Benin.
Pat was always an enthusiastic, knowledgeable, and realistic proponent of American democracy and American ideals, while never trying to explain away the many contradictions that still bedevil us. After seven years as a French-speaking housewife in a Western French city, she returned to Pennsylvania with her two-year-old son Fred and joined the U.S. Foreign Service in 1980. She served her first tour in Paris, where she convinced the reluctant French to allow the first trans-Atlantic satellite reception antenna atop an important Paris building, and where she managed press affairs for President Reagan's triumphant tour of the Normandy landing beaches, photos of which helped him regain the Presidency in 1983. Her later tours took her to Zaire, now the Democratic Republic of Congo, to Washington, DC, and to Burkina Faso. In 1989, she fell in love with and married Richard S. D. Hawkins. He left 25 successful years in the private sector to join the Foreign Service as a junior officer, and they served together in Colombia, the Ivory Coast, the Dominican Republic, and again in Washington. Near the end of their careers, the happy couple split up, and Pat represented U.S. ambitions for and assistance to Togo while her husband served two years in Iraq. Retiring in 2011, both settled at the scene of many happy memories of Santa Fe from her husband's childhood. True to her roots, Pat followed in the footsteps of her mother and mother-in-law to gain prominence in the Santa Fe and New Mexico chapters of the League of Women Voters, a nonpartisan organization devoted to many initiatives for democracy and voter information.
Pat Hawkins was a humanistic liberal all her life, following her father, who worked to establish the Stroudsburg, PA chapter of the NAACP. He was a sports car enthusiast who died young, but only after teaching Pat to change the brakes on their Austin Healy. She attended Barnard College and always felt a strong affinity to New York, transferring her affection to congregations of downtrodden souls in many urban settings around the world. She remained, to her dying day, a sharp and insightful private critic of American foreign and domestic politics and policy, while never betraying her oath to "support and defend the Constitution of the United States." Her many friends will remember her for her generous spirit and welcoming demeanor, displayed in countless dinners and celebrations for friends in Santa Fe and across the globe.
The attached photo, from one of their many cultural excursions in West Africa, comes from the homeland in Northern Mali of the Dogon people. Their strong cultural traditions include that of dancing on the rooftops in masks with crests that depict the winged flight of birds which summon the departing spirit to heavenly rest, above the reaches of the demons below.
In keeping with her wishes, no funeral service will be held. A gathering of friends will be arranged at a later date. Pat will be buried in St. Paul's Rock Creek Cemetery, Washington, DC, in company with other departed diplomats. Rest in peace, beloved friend.

To order memorial trees or send flowers to the family in memory of Patricia Hawkins, please visit our flower store.