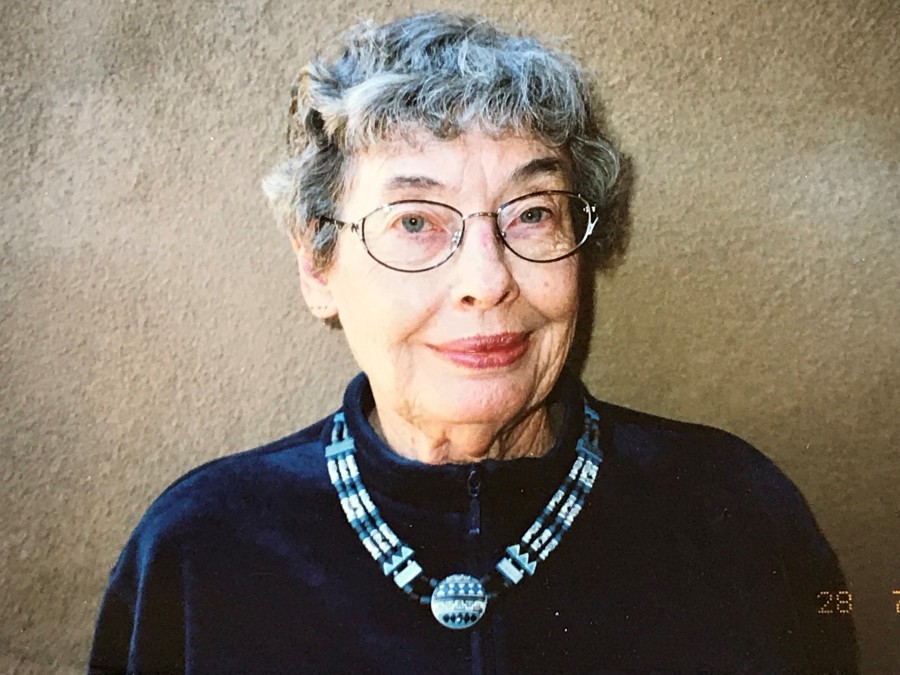 "The ones that love us never really leave us."

After being stopped by police for speeding, F. Stanley Minshall and Tressa Garrett Minshall gladly received a police escort to the Hospital in Albany, Oregon, where their daughter, Mary Jeanette Minshall Ranken was born on November 28, 1927. Mary grew up in Oregon, graduating from University High School in Eugene in 1946 with a close-knit class of 73 who kept in touch over the years thanks to her best friend, Pat Brooks. In August of 1946, she moved with her parents and younger brother, Fred, to Los Alamos, N.M. so that her father could expand on work tied to the Manhattan Project at Los Alamos National Laboratory.  That fall, Mary attended the University of New Mexico in Albuquerque and later transferred to San Jose State College in California to major in Education earning a BA in 1949.   After graduating, she returned to Los Alamos to work as a Secretary at LANL.  One unique assignment in 1951 was to support operations  at the Control Point of the Nevada Test Site during Operation Ranger, where she witnessed 5 drops for atmospheric testing of nuclear weapons.   She was engaged at the time, and found her wedding dress in a little town in Nevada.

She married her husband of 27 years, Will Ranken, not long after returning from the Test Site.  They had three children, Em, Bill and Doug.  While raising her children, she was active as a volunteer with the AAUW, serving as president and working on a project to establish and support head start programs in New Mexico.  She was also a member of the Unitarian Universalist Church in Los Alamos, where she served as the Director for Religious Education.  Family vacations were a fun time. They took their small trailer, the children and the dog and traveled to see sights of the West including the Rocky Mountains, Yellowstone, Banff, Zion, and Bryce Canyon.  On one trip, they drove up the west coast from California to Oregon where she introduced her children to agates on the beach of the rocky coast, salt-water taffy and many relatives.  Mary and Will later became part owners of an old house in Crested Butte, Colorado, and enjoyed spending friend and family weekends at the “Last Homely House” hiking in the summer and skiing in the winter.

When Mary and Will parted ways in 1978, she moved with her cat to Las Cruces, NM, to attend New Mexico State University, and earned a Masters of Arts in Teaching in 1980. She realized a dream to work in the field of education, serving as an educational diagnostician for the Albuquerque Public School System until 1991.

During retirement, as part of her life-long interest in science, she volunteered as a docent with the New Mexico Museum of Natural History and Science.  She especially liked geology and enjoyed visiting places with interesting rocks to hammer open.  Eventually, she moved to Santa Fe, to live with her companion of many years, Bob Peck.  Shortly after 9/11, they bravely went on a 3-week tour of China.   They enjoyed other travels together, including a cruise to Alaska, and a trip to Italy for wine tasting.  In 2014, due to increasing health challenges, she moved to an apartment in Kingston Residence, where she spent her remaining years making new friends, participating in various activities, and eating good food she didn’t have to cook. Her secret to a long life was gin martinis, which she enthusiastically enjoyed at Friday happy hours during her last years. Mary died peacefully on July 4, with her children by her side.

Mary was fun loving and outgoing, and made many friends throughout her life. She was a devoted mother and grandmother, and was happiest when surrounded by her family and friends.

In lieu of flowers, donations can be made to the Espanola Valley Humane Society or the New Mexico Museum of Natural History and Science in Albuquerque.

Family will update when Celebration of Life plans are in place.

To plant a beautiful memorial tree in memory of Mary Ranken, please visit our Tree Store.

To order memorial trees or send flowers to the family in memory of Mary Ranken, please visit our flower store.