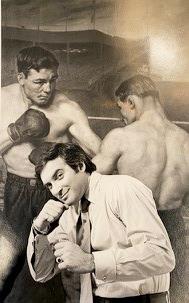 APRIL 22, 1933 – JUNE 5, 2021
Marvin Sloves, 88, and resident of Santa Fe, NM passed away on June 5, 2021 at home. By his side was Thom von Buelow, beloved husband and longtime partner.
Marvin was born April 22, 1933 and raised in the Bronx, NY by his father, John H. Sloves (aka Johnny Murray, a well-known feather- weight boxer in NYC) and his mother, Evelyn (Wishan) Sloves. He was the oldest of three siblings which included Phillip and Flora, who are deceased.
He graduated with an AB from Brandeis University in 1955 and did postgraduate work at The Oriental Institute, University of Chicago, 1961.
In 1967, Marvin founded Scali, McCabe, Sloves along with his partners, Ed McCabe, Sam Scali, Alan Pesky, and Len Hultgren. It was an ad agency that set standards of excellence in creative advertising and built brands in a competitive industry. The New York Times recognized that by featuring the agency in a cover story in The Sunday Magazine section in 1976. In 1974, Ad Age magazine named Scali, McCabe, Sloves, Agency of the Year and in 1990, two of their ads were listed in Ad Age's Top 100 Campaigns for the 20th Century. Their blue chip clients included Volvo, Perdue Chicken, Nikon, Hebrew National, Maxell, Hertz, and Mercedes Benz among many others.
He was President/Chief Executive Officer of the agency from 1967-1981 and then Chairman/Chief Executive Officer from 1981-1993. Scali, McCabe, Sloves was acquired by Ogilvy & Mather in 1976 and then became part of WPP. In 1993, the company became part of Lowe International where he was the Vice Chairman of The Lowe Group from 1993-1995.
Marvin retired from advertising in 1999. He was the penultimate ad man and brought a sense of culture and relevancy to Scali, McCabe, Sloves and the ad business in general.
He traveled the world in retirement and moved to Italy with Thom von Buelow where they lived for 17 years in Tuscany. In 2016, they moved to Santa Fe, NM.
Marvin was an avid supporter of the arts which included The Metropolitan Opera, The Chamber Music Society of Lincoln Center, The Santa Fe Opera, and Santa Fe Chamber Music. While in New York, he supported one of his favorite charities, The Burden Center for the Aging, where he served on the Board of Directors. He was also a great art collector and is known to have one of the most extensive collections of boxing art and memorabilia.
Marvin will be missed by so many people who learned invaluable life lessons from his great spirit. He will be recollected as a great friend in tough times, as an elegant and cultured gentleman, a knowledgeable intellectual, and a warmhearted, respected and well-loved man. He was bigger than life for those who knew and loved him.

To order memorial trees or send flowers to the family in memory of Marvin Sloves, please visit our flower store.