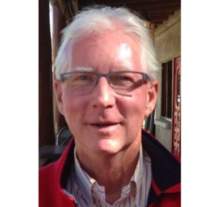 Howell M. Palmer, III, 65, formerly of the Berkshires of western MA, passed away peacefully in the company of his wife and dear friends on April 28, 2017 at the Christus St. Vincent Hospital in Santa Fe, NM, after facing a fatal degenerative brain disease for the past 18 months. He was the devoted and loving husband of Susan (Mierzejewski) Palmer and the proud father of Daniel, Travis, Benjamin, and Emily Palmer, and Sarah Sperber and Jason Mierzejewski. He was also the delighted grandfather of Sophia Ellis and Myles LeVardi. Born in Fall River, MA, Howell was the only son of the late Howell Palmer, II and Mary Johnson Palmer.

Howell was raised in various locations throughout the northeast, and graduated from Greenwich (CT) High School. He was also a graduate of Bucknell University in Lewisburg, PA and was designated as Fellow of the Society of Actuaries (FSA), a Member of American Academy of Actuaries (MAAA) and a Fellow of the Life Management Institute (FLMI).

During his distinguished career in the life Insurance industry, Howell rose through the ranks of Mass Mutual and then Berkshire Life Insurance Company, where he retired at the age of 54 as President. After quickly determining an early retirement did not suit him, he resumed his professional career as Executive Vice President, Chief Operating Officer, and Chief Financial Officer of Security Mutual Life Insurance in Binghamton, NY.

Howell and Susan have been thankful for their many friends across the country and have savored a warm and vibrant social life in every place they have lived. Howell enjoyed golf, wine connoisseurship and fine dining, world travel, and spending a portion of summer at the family beach home in Westport, MA. He was the quintessential sports fan and never wavered from his loyalty to his Massachusetts teams – the New England Patriots in particular. But his favorite past time of all was being with his children and grandchildren.

After his second retirement, Howell and Susan moved to Santa Fe, NM, where he became a supporter of several area non-profits, and served as the Vice President of the Board of the New Mexico Community Foundation. Howell was a true gentleman who endowed his family and friends with infinite kindness, humor, and generosity. He took great pleasure in his life and was always quick with a smile and a sparkly twinkle in his beautiful blue eyes. As as he grappled with the manifestations of his illness, Howell displayed remarkable strength and grace, and was always ready to champion the endeavors of Susan, their children, and the friends and organizations about which he cared.

In addition to his immediate family Howell leaves behind a community of beloved friends who have supported him and his family during his most challenging days, and to whom his family will be forever grateful.

To order memorial trees or send flowers to the family in memory of Howell Palmer III, please visit our flower store.