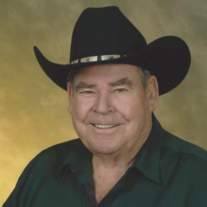 George W. Decker went to be with the Lord on Sunday March 26, 2017 at the age of 83 with his loving family by his side, following a long illness with COPD.   He was born February 22, 1934 in Kaufman County, Texas, the son of Aubrey Allen Decker and Tressie Mildred Friday.  The family left East Texas and moved to Midland, Texas and George grew up there.  At the tender age of 17 he enlisted in the Air Force.  He met and married the love of his life, Arlene Sonsteng, while stationed in Montana at the Great Falls Air Force Base.  Arlene was the daughter of a Montana homesteader.   George will tell you his greatest accomplishment in life was his marriage of 63 years and his 5 children, 8 grandchildren and 5 great grandchildren.  He loved and enjoyed spending time with his family.
Upon his Air Force discharge he returned to Midland. In 1961 he moved his family to New Mexico.   Following various occupations he retired from the New Mexico Department of Corrections in 1990.
He was preceded in death by his son, Glenn Curtis Decker, his parents, two brothers and a sister.
Survivors are his wife, Arlene;  daughters and son-in-laws,  Glenda (Ed) Stephens,  Gayla Delgado and Brandee (Marshall) Martinez all of Santa Fe and  Gina (Don)  Bell of Albuquerque.   Grandchildren are Sherry Stephens, Shauna Eason, Michael Delgado, Steven Stevens, Bradley Martinez, Paige Martinez, Mariah Martinez, Nathan Martinez, and Great Grandchildren Dylan Jaramillo, Daija Jaramillo, Jonyce Cordova, Jerrod Delgado and Jade Delgado.  He has one sister in Ballinger, Texas and many cousins, nieces and nephews who reside in numerous states.
George was a man who wore a number of hats. However his favorite hat was a good old Texas cowboy hat called a Stetson.  He enjoyed construction work, mechanics, building furniture and other woodworking projects.  He loved the outdoors and at every chance he had he would slip off to fish or hunt.  He was a social gentleman and liked to visit and share a story.  He enjoyed a good joke and a boneless prime rib steak cooked to his perfection.   As the disease progressed he became skilled at controlling the television remote and could give you an update on the news and weather as well as the sport team standings.
Please join the family for a Celebration of Life on Sunday April 2, 2017 from
2:00-6:00 PM at the Fraternal Order of Police (FOP) in Santa Fe.

To order memorial trees or send flowers to the family in memory of George Decker, please visit our flower store.