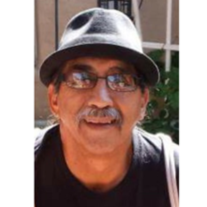 George M. Anaya, 67, of Santa Fe, New Mexico, passed away peacefully at home on March 9, 2017 in Nambe Pueblo.
George was born in Santa Fe, NM on December 23, 1949. He graduated from Santa Fe High School in 1967, shortly after George enlisted in the United States Army in December 1967.
George enjoyed spending his time outdoors camping, fishing, working on his yard and spending time with his family. George’s main priority in life was caring for his beautiful mother and grandchildren. The smile and humor that George had would light up anyone’s day. His love for music and dancing was a large part of his life and he shared that joy with so many.
George is preceded in death by his Father Ernest Anaya; Brother David “Rick” Anaya.
George is survived by his mother Mary Anaya; two daughters Georgette O’Leary and husband Richard, Jeanette Romero; grandchildren Aislihn & Ciara O’Leary and Ernesto George Anaya; sister Rose Andermann, companion of 18 years Diane Emarthle, mother and grandmother of his children Marie Vigil, dear cousin Priscilla Coriz and numerous nephews, nieces, cousins and friends.
We would like to say thank you to Amber Hospice Care for their kindness and care they provided him.
Pallbearers:  Edward Martinez, Arthur Ramirez, John Martinez, Ricardo Maez, Henry Urioste, Robert Roybal, Tony Encinias and Nick Clokey.
Funeral arrangements are being handled by Avista Cremation and Burial, 2500 Camino Entrada, Santa Fe, NM where a viewing will be held on March 22, 2017 from 5:00 p.m. to 7:00 p.m.  Rosary will be held at St. Anne’s Church on March 22, 2017 at 7:30 p.m. Mass at St. Anne’s Church on March 23, 2017 at 10:00 a.m. Burial will immediately follow at the Santa Fe National Cemetery. Reception will be a St. Anne’s Hall adjacent to the church after the burial.

To order memorial trees or send flowers to the family in memory of George Anaya, please visit our flower store.