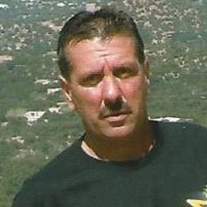 Gary David Kavanaugh, age 55, a man who never met a stranger, left us unexpectedly on October 27, 2016.  He was second to the youngest of five sons born to the late Isabel and Henry Kavanaugh.
Gary was born in Santa Fe and enjoyed a happy childhood in the original Dale Bellamah neighborhood which was comprised of many children his age who remained his friends for life.  He was a 1979 graduate of Santa Fe High School.  He was an accomplished photographer and worked for the Los Alamos National Laboratory until a motorcycle accident changed the course of his life.
Gary had a passion for life, photography, entertaining, collecting old cars, Cushman motor scooters, antique gas pumps and almost anything that would rival a museum’s collection.  A visit to Gary’s house was definitely a trip down memory lane.  He was self-employed the majority of his life and he loved the independence that afforded him, even though he worked extremely hard.  As an added bonus he came in contact with people from all walks of life and he immediately made their acquaintance and formed lifetime friendships.  He was not a wealthy man but he had a heart of gold, his door was always open and he would give you the shirt off his back.
The love of Gary’s life was his son Arlen, who survives him.  He loved taking Arlen to many places and doting on him.  Other survivors are his brothers Paul (Karla) and Tim.  He was a devoted uncle to Roxanne, Jayme and Karley.  He had two great nephews Damon and Jesse Mente.  The mother of his son, Cindy Hagman; Matthew Quintana, whom he raised like a son; and numerous aunts, uncles, cousins, and many friends also survive him.
Gary was preceded in death by his parents, his brothers Henry, Jr. and Karl, his grandparents Nicolas and Henrietta Kavanaugh and Vianes and Josefina Rodriguez, his precious madrina Exilda Pacheco, and other beloved aunts, uncles and cousins.
Gary has been cremated and his ashes will be carried into church by Cecilia Frank and John Padilla.  His remains will rest in a beautiful handmade urn lovingly provided by our cousins Severino (Sonny) and Bertha Borrego.
Visitation will be held at Santa Maria de la Paz Catholic Church on Thursday, November 3, starting at 6:00 pm.  A rosary will follow at 7:00 pm.  Mass of Christian Burial will be held on Friday, November 4, at Santa Maria de la Paz Catholic Church at 10:30 am with burial to follow immediately at Rosario Cemetery.
In lieu of flowers, Gary would have liked that donations be made in his memory to Limbs for Life, 9604 N. May Avenue, Oklahoma City, OK 73120 or online at limbsforlife.org

To order memorial trees or send flowers to the family in memory of Gary Kavanaugh, please visit our flower store.