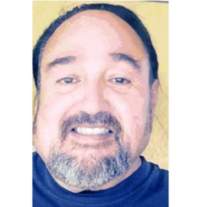 E. Victor (Vic) Serrano passed away suddenly October 12, 2016.  Victor was born on December 26, 1957 in Santa Fe, New Mexico.  Anyone who knew Vic knew that he was the kindest, most generous person.  Vic lived life to the fullest.  He believed in having a good time and always made sure everyone around him was happy.  Vic enjoyed spending time with his grandchildren, fishing, singing karaoke with his friends and taking a ride on his Harley or Trike.  Victor dedicated over 25 years to the auto industry as a car salesman and manager.  Victor’s infectious smile and quick wit will never be forgotten.  Victor is preceded in death by paternal grandparents Eduardo and Dulcinea Serrano, maternal grandparents Oswaldo and Rafaelita Montoya and his son-in law Abraham Sanchez III.
Victor is survived by his parents, Edward (Lalo) Serrano, Socorro (Suki) Gonzales and step father Jose Gonzales; Mother of his children and close friend Laura Arnal, his children, Eduardo (Lalo) Serrano & Camille, Elena Sanchez; siblings, Leonard Serrano & Jeanette, Zelma Padilla & Mark, Gino Serrano & Bernadette, Anita Tapia & Patrick, Onecimo Gonzales & Tameka and special nephew Ryan (Rysho) Serrano.  Victor is also survived by his grandchildren Isabella, Miguel Jr. and Roman whom he adored very much.  Victor is survived by many uncles, aunts, nephews, nieces, cousins, Godchildren and many treasured friends.  Vic will be truly missed by all!
Memorial services will be held on Saturday October 22, 2016 at 11:00 am at Avista Cremation and Burial 2500 Camino Entrada, Santa Fe, NM.  A celebration of Victor’s life will follow at 2:00 pm at the Fraternal Order of the Eagles, 833 Early Street, Santa Fe, NM 87505.  Harley/Biker gear encouraged.

To order memorial trees or send flowers to the family in memory of E. Victor Serrano, please visit our flower store.

Fraternal Order of the Eagles