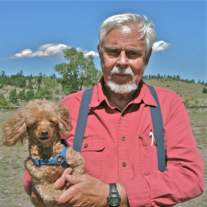 Charles R. Barnett died in his Santa Fe Home on Wednesday, July 20th, after a brief illness.   He shall be missed by his many devoted friends.
Charles was born in the Bronx, New York on February 23, 1934, the son of Carlyle Reginald Barnett and his wife Anne Natalie (Mooney) Barnett.  He spent much of his youth in New Jersey and his summers in the family home in Rosendale, New York.
Charles was graduated from Fordham Preparatory College in 1952 and took his Bachelor of Arts degree from Columbia University in 1956.  While at Columbia he both worked and studied in the Geology Department, concentrating on Isotopes.   Upon graduation he briefly worked in the film industry, an area he would again focus on in later life.    From 1956 through 1962, Charles was a member of the U.S. Army.  He was stationed in West Germany and worked in intelligence.
Upon his Honorable Discharge from the Army, Charles began to work in the field of Atomic Energy.   He was certified in 1964 in Radionuclide Analysis and began work later that year as a University of California contractor to the Atomic Energy Commission at Los Alamos, where Charles would work for more than 30 years.     In addition to his own scientific research, Charles’ broad mind and straight-talking people skills landed him a unique roll at Los Alamos:   Charles was increasingly called upon to create understanding between scientists of various different disciplines.    While residing in Santa Fe and working at Los Alamos, Charles also somehow found time to earn a Ph.D. from the Union for Experimenting Colleges and Universities in 1979, a union sponsored by Bard and Goddard Colleges and Hofstra University.
After his retirement from Los Alamos in 1995, he redirected his great creative energies to an early love – filmmaking.   In short order Charles formed a production company and began writing, producing and directing films.   He quickly began to enjoy critical success with the film Drop the Bomb, which he produced in 1998.  His career in film production spanned twenty years and he enjoyed notable success.   His most recent films were his Forgotten Hero (2014) and Boston Nightly (2015).   On the side Charles produced a number of kitsch films, largely for his friends, often centered on the Cumbres and Toltec Scenic Railroad in Chama, and often starring his dog Gnuf-Gnuf.     During this creative period Charles somehow also managed to write 15 novels and numerous short stories.
Charles’ friends were very important to him.   He treasured his Wednesday lunches and Sunday morning coffees with his scientific friends from Los Alamos.    His first cousin, Al Mooney, with whom he grew up, was especially dear to him, as were his other close friends.       A Mass of Christian Burial will be celebrated for Charles on Saturday, July 23rd at 11am by Rt. Rev. Philip Lawrence, O.S.B. Monastery of Christ in the Desert, north of Abiquiu, New Mexico, followed by a festive meal.   Charles’ remains will be interred in the Abbey Cemetery.

To order memorial trees or send flowers to the family in memory of Charles Barnett, please visit our flower store.

Monastery of Christ in the Desert