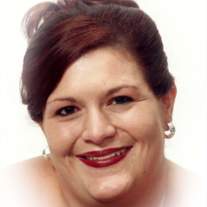 Betty Jo Manzanares-Hart, age 39, a resident of Santa Fe passed away on April 17, 2016.  Betty was born on November 11, 1976 to David and Julia Manzanares.  Betty Jo was preceded in death by her father David J. Manzanares, paternal grandparents Narciso and Rosana Manzanares and Frank Manzanares; maternal grandparents Aaron and Veronica Roybal; great infant niece Ahriah Baca; and godfather Edward Martinez.
Betty Jo, also known to many as “Betty Boop” was a fun and loving individual who dedicated most of her career and adult life to public service as a Police/Fire Department dispatcher for the following agencies:  City of Santa Fe, Santa Fe County Sherriff, Pueblo of Pojoaque/Bureau of Indian Affairs, and most recently New Mexico State Police and Federal Bureau of Investigations.  Her love and compassion in serving the public and her fellow law enforcement family earned her the honor of 2011 Civilian of the Year Award.
Betty Jo was a 1995 Pojoaque High School Graduate.  She also represented the City of Holy Faith as a Princessa de las Fiestas de Santa Fe in 2002, at which time she met her loving husband, Kevin.  As their love grew, so did their family with two beautiful children, Kaiden and Kaleiann.  When not serving the public, she devoted her time as a mother and wife to her husband and children by always making memories with them.  Their favorite past times included spontaneous trips to Albuquerque and family vacations to see the Colorado Rockies and Disneyland.  Her love for the city of Santa Fe engulfed her with many trips to the plaza to listen to music and enjoy her family.  She enjoyed the simple things in life and will always be remembered for her silly sense of humor, and her uniqueness that only one knew was “That’s Betty.”

To order memorial trees or send flowers to the family in memory of Betty Jo Manzanares-Hart, please visit our flower store.